Max Immelmann, the newest German Aircraft Carrier has a insane unit which is armed with bouncing bombs (skip bombs)

You are using an out of date browser. It may not display this or other websites correctly.
You should upgrade or use an alternative browser.
M

I recently purchased a German Tier X aircraft carrier by the name of Max Immelmann which only has Torpedo bombers and skip bombers which actually has the bouncing bomb invented by Barnes Wallis. A video of the skip bomber squadrons in action is in the link below:

Maybe it's me, but all I see happening is a bunch of planes getting shot down and then a torpedo strike.

It's at 3:15. You can clearly see the bouncing bombs heading to a target.

I've notice on torpedo launches that the aircraft get a "arc of fire" (or "drop boxes") for each torpedo in the squadron for the optimum release point. The bouncing bombs seem to get the three parallel lines for targeting. Are they (the parallel lines) also used for the dive bombers with actual bombs?

I thought the bouncing bombs were to take out dams. I didn't realize they were ever used in naval conflict.

I'm not sure I ever heard of them used that way, for one very good reason (that comes to mind immediately). It that shows on the far right of the bouncing bombs - it skipped fully over the ship (although they could have a magnetic proximity fuse for over head detonations).

Let's see what wiki and google have to say. 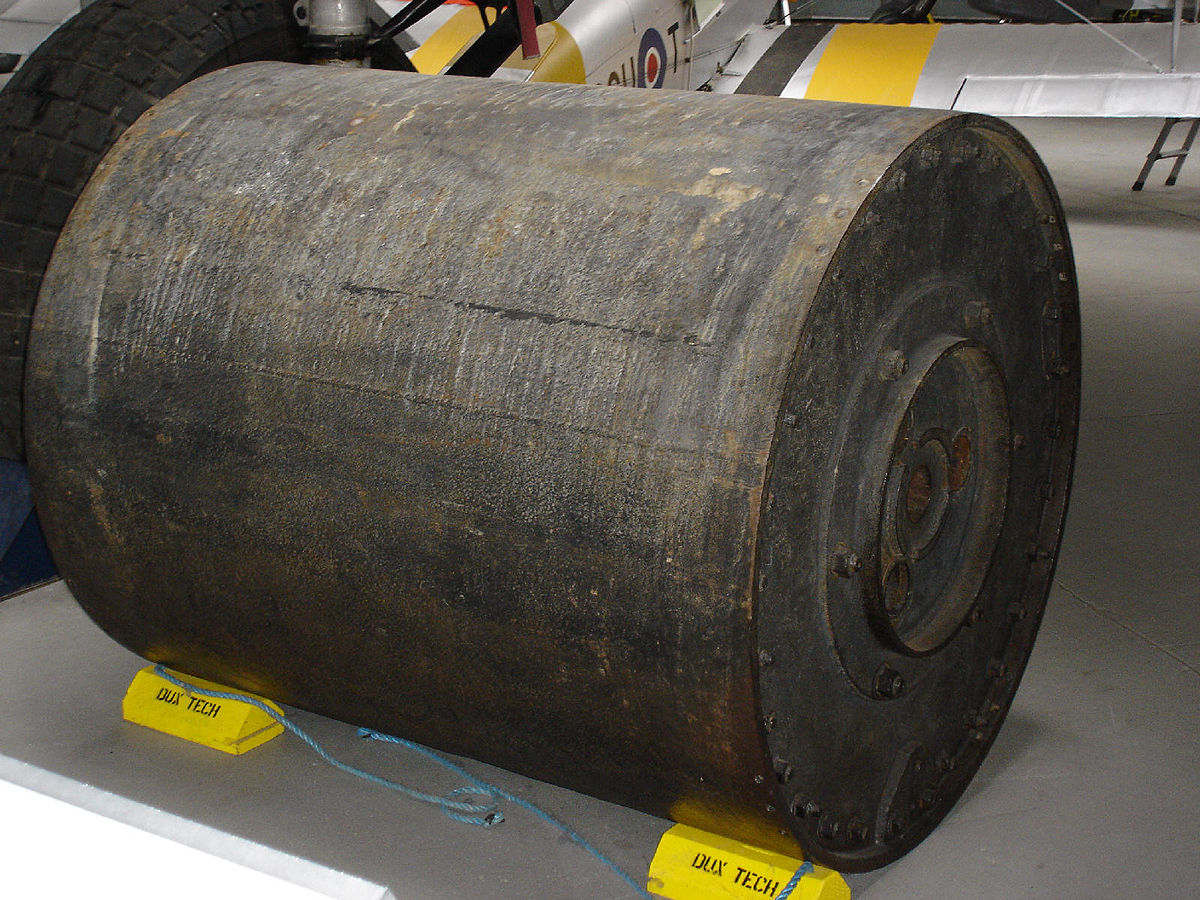 Barnes Wallis' April 1942 paper "Spherical Bomb – Surface Torpedo" described a method of attack in which a weapon would be bounced across water until it struck its target, then sink to explode under water, much like a depth charge. Bouncing it across the surface would allow it to be aimed directly at its target, while avoiding underwater defences, as well as some above the surface, and such a weapon would take advantage of the "bubble pulse" effect typical of underwater explosions, greatly increasing its effectiveness: Wallis's paper identified suitable targets as hydro-electric dams "and floating vessels moored in calm waters such as the Norwegian fjords".[3]
Click to expand...

A distinctive feature of the weapon, added in the course of development, was back-spin, which improved the height and stability of its flight and its ability to bounce, and helped the weapon to remain in contact with, or at least close proximity to, its target on arrival.[Fn 3] Back-spin is a normal feature in the flight of golf balls, owing to the manner in which they are struck by the club, and it is perhaps for this reason that all forms of the weapon which were developed were known generically as "Golf mines", and some of the spherical prototypes featured dimples.[Fn 4]

It was decided in November 1942 to devise a larger version of Wallis's weapon for use against dams, and a smaller one for use against ships: these were code-named "Upkeep" and "Highball" respectively.[9] Though each version derived from what was originally envisaged as a spherical bomb, early prototypes for both Upkeep and Highball consisted of a cylindrical bomb within a spherical casing.
Click to expand...

On the night of 16/17 May 1943, Operation Chastise attacked dams in Germany's Ruhr Valley, using Upkeep. Two dams were breached, causing widespread flooding, damage, and loss of life. The significance of this attack upon the progress of the war is debated.[20] British losses during the operation were heavy; eight of the 19 attacking aircraft failed to return, along with 53 of 113 RAF aircrew.[21] Upkeep was not used again operationally. By the time the war ended, the remaining operational Upkeep bombs had started to deteriorate and were dumped into the North Sea without their detonation devices.[22]
Click to expand...

By the end of May 1944, problems with releasing Highball had been resolved as had problems with aiming. Aiming Highball required a different method from Upkeep; the problem was solved by Wallis's design of a ring aperture sight fixed to a flying helmet.[36] Highball was now a sphere with flattened poles and the explosive charge was Torpex, enclosed in a cylinder, as in Upkeep; detonation was by a single hydrostatic pistol, set to fire at a depth of 27 feet (8 m), and its weight was 1,280 pounds (581 kg), of which 600 pounds (272 kg) was Torpex.[citation needed]

Highball was never used operationally: on 12 November 1944, in Operation Catechism, Lancasters with Tallboy bombs sank its primary target, Tirpitz. Other potential targets had been considered during Highball's development and later. These included the ships of the Italian navy, canals, dry docks, submarine pens, and railway tunnels (for which testing took place in 1943). But Italy surrendered in September 1943, and the other target ideas were dismissed as impracticable.[37]

In January 1945, at the Vickers experimental facility at Foxwarren, near Cobham, Surrey, a Douglas A-26 Invader of the USAAF was adapted to carry two Highballs almost completely enclosed in the bomb bay, using parts from a Mosquito conversion. After brief flight testing in the UK, the kit was sent to Wright Field, Ohio, and installed in an A-26C Invader. Twenty-five inert Highballs, renamed "Speedee" bombs, were also sent for use in the USAAF trials. Drop tests were carried out over Choctawhatchee Bay near Eglin Field, Florida, but the programme was abandoned, after the bomb bounced back at A-26C-25-DT Invader 43-22644 on Water Range 60, causing loss of the rear fuselage and a fatal crash on 28 April 1945.[38]
Click to expand...

So it's pretty much as I thought. I seem to remember watching a documentary or movie or something about that. They were trying to take out two dams not just to cause the widespread damage (which was a bonus) but to kill power to the region as there were several radar installations or something like that they wanted disabled.

They had tried conventional bombing a few times but it just was next to impossible to hit the dam. That gave birth to the bouncing bomb idea.

Mr_Alex said:
I recently purchased a German Tier X aircraft carrier by the name of Max Immelmann
Click to expand...

Out of curiosity how much was it?
M

Grimhogun said:
Out of curiosity how much was it?
Click to expand...

You buy ships with base supplies now?

Wow. I'm really out of the loop.