It's fitting I guess that the worst president in history is married to the worst first Lady in history.

Not only did she rip up the rose garden and replace it with concrete, but she didn't bother interrupting her photo shoot while the capital was being assaulted.

What's more, she writes a release about the victims who died and makes it all about her. 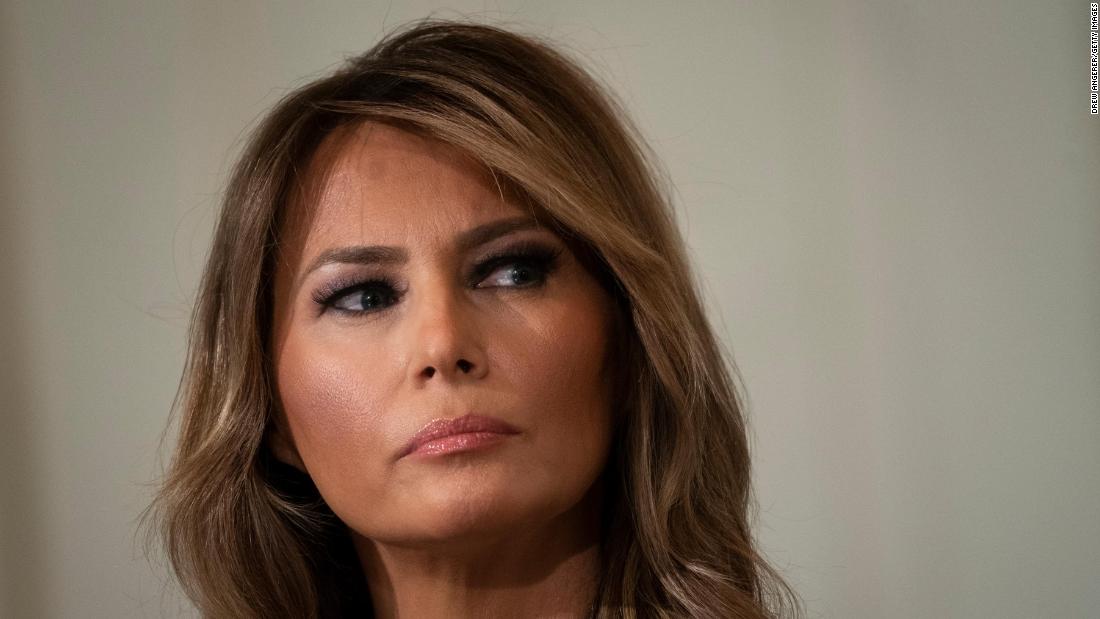 First lady Melania Trump mourned the lives lost -- first of the rioters and then the Capitol Police officers -- from last week's attack, cast herself as a victim of "salacious gossip" but placed no responsibility for the domestic terrorism on husband President Donald Trump or his rhetoric.

Some folks may not know this: the rose garden was a very special place. When a first Lady passes away, their family is invited to plant a new rose bush in the rose garden on her behalf.

Knowing that, Melania destroyed it. It was HER house, HER garden and by God she didn't want any other first Lady anywhere near it.

And now this article. SHE feels mistreated. SHE is a victim. Not the nation, not our democracy, not the 5 dead.

Not the former first ladies she disrespected, not the memory of Jackie Kennedy and the legacy she created for all first ladies to come.

I hope Dr. Biden restores Jackie Kennedy's rose garden along with the clippings of the rose bushes of the former first ladies.

I then wouldn't mind never seeing Melania Trump's decendents being invited to plant a rose bush on her behalf.

Maybe a doormat at the entry would be more appropriate.
Reactions: Zeedox and Capitalism_is_Theft
C

Melania is real RAT. She is a terrible first lady. She actually is in some ways even meaner than Trump actually is. She was found out to be encouraging him to be mean, and to double down in his actions many times during the 4 year term. She was fooling a lot of people at first that she was the victim in their relationship. What a con job. But, soon most people wised up quickly.

She even had the Pope fooled initially. Or was he? I often wonder?

She's simply a spoiled little tart, a selfish little, greedy, gold digging, manipulator looking for a mark that was hanging around Epstein and she was looking for a wealthy catch, and Epstein hooked her up with Trump, is all that happened. I mean seriously, Slovenia ? What's there? I'm trying to be dismissive of a country or people or a culture, a nation etc. I'm simply pointing out that, well go figure. Her father had those connections, and was known for the things he was known for in that area, and when you study the story behind her father and their relationship with the community it speaks volumes behind who, what, and how she is.

Look at the vale of the man, who selected her for his wife, based upon what values. And, you get a package made in hell for the Whitehouse!

Melania turns on a dime on her friends, she throws everything under the bus in an instant. She will not strike a lick a snake, unless she want's to do it. They only came there for the benefits of the position, the perks, the advantages, the money, the contracts, the money, and grifting that could be made, etc.

They didn't give a shit about the people, the tax payer, the job, democracy, the republic, the constitution, the fate of the nation, national security, you name it.

But, as you say, Melania can only think "of herself."

How narrowminded, the phrase that come's to my mind is "tone-deaf."

Tone-deaf in the worst kind of way, at the worst time. But, the problem is she's always tone-deaf.

The real tragedy is that son. What a shame. That young boy is being raised by those two. Melania and Donald, one day may wake up have that son stand over them at some point in a worst kind of way? You never know.
Reactions: Zeedox and Gomez Adams
C

SHE PROVES HERSELF AGAIN.

And she's robbing the White House blind as we speak. There goes the bust of Lincoln.:

That filthy grifting little kleptomaniac !! They have got to do inventory and have them brought back for that stuff !

And the other asshat Peter Navarro is taking the art:

So,, There nothing but a bunch of cartoon grifting money clutching assholes all of them !!
C

Anyone watching Ft. Knox until after the 20th of Jan. ?

Gomez Adams said:
And the other asshat Peter Navarro is taking the art:

trump and xi? keep it.

Anyone watching Ft. Knox until after the 20th of Jan. ?
Click to expand...

haven't you heard? there is no real gold left in fort knox

I love these idiots that claim, “oh we gotta her our money back on the gold standard again, blah, blah etc... no one even realizes that would destroy our entire monetary system as it even exist today period!!”
It would blow it to into little pieces all over the room!

It’s been done before, and it never worked out.

Kennedy was going to start redoing it on silver certificates or some kind of deal before he got shot, but not gold.

I’ve heard 2 good economist explain this and I would like to hear what Wolffs take on it is ?

But, that’s a pipe dream, when I hear someone claiming we have to ge back on gold again with our currency.

Yes,,,, for all we know Goldfinger from James Bond came came back and stole all the gold down there. I think it’s probably been sent to China or overseas, or to whomever to keep us from being god knows what?
You must log in or register to reply here.
Share:
Facebook Twitter Reddit Pinterest Email Share Link
Top Bottom