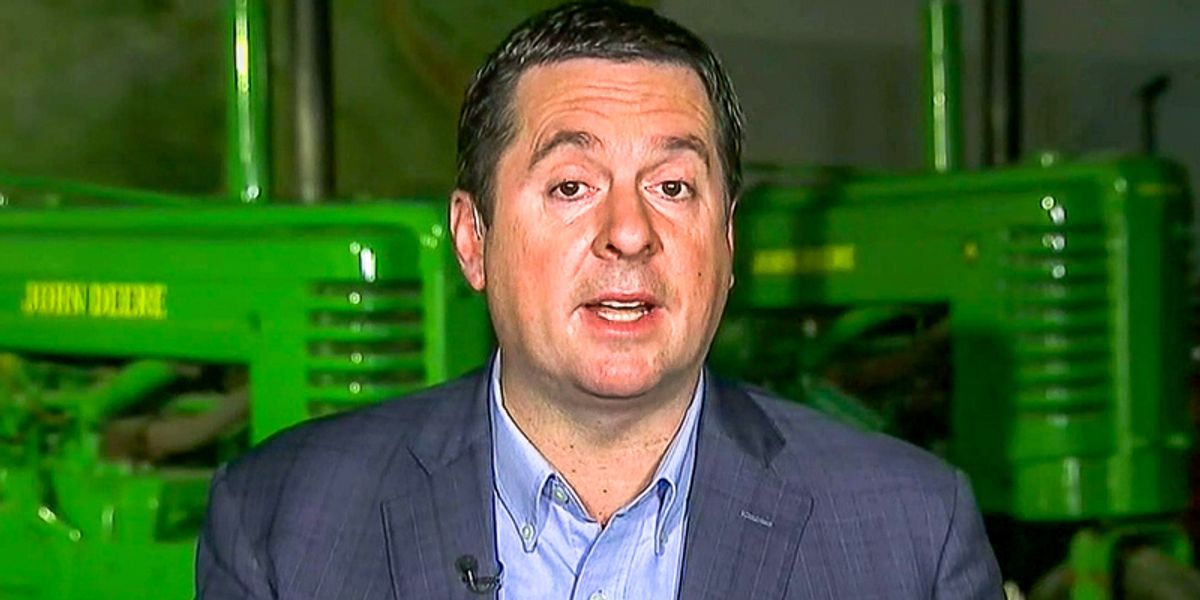 With the tantrums of the Mad King sucking the oxygen out of every news cycle, it's easy for the chaos to overshadow even the swampiest behavior of swamp creatures in Washington D.C.Take Congressman Devin Nunes. Please.Nunes isn't receiving nearly the attention he deserves for his continuing...

Talk about a continuing loser.

Again, can't read it. The popups block the article. It's like playing whack-a-mole trying to read that site, which is why I absolutely can't stand it.

From what I know about Nunes though, he's about to get into hot water. The question around judicial circles right now is: How does he afford all those lawsuits? Seriously. The guy files suit so many times it would take an income of millions, which he doesn't have, to sustain them.

He'd better watch his step when the new AG is hired. I'm willing to bet the first thing the new AG does is start putting peoples campaign money expenditures under a microscope.

"But the real story isn't that Nunes lost a stupid lawsuit. It turns out this is just one in a long line of stupid lawsuits that he keeps losing, only to come back unbowed for more. And worse yet, curtailing other people's rights to use the court system in the name of "tort reform" is one of Nunes' proudest legislative priorities.

It doesn't get much more hypocritical than that. But that doesn't mean Nunes is likely to get tired of losing. Consider that the most recent loss to the Washington Post comes on the heels of his filing still another suit against the Post, as reported by lawandcrime.com:


"Rep. Devin Nunes (R-Calif.) sued the Washington Post (again) on Tuesday, alleging that the newspaper and reporter Ellen Nakashima published defamatory statements about a late-night White House visit in 2017 and claims that the Obama administration "spied" on Donald Trump and his associates in Trump Tower.

Nunes's lawsuits have repeatedly been rejected by courts, but the litigious congressman—who infamously attempted to sue a fake cow and parody of his own mom—appears hell-bent on continuing to pursue litigation that is almost certain to fail."

The Post's lawyers most surely be growing weary of Nunes and his lawyers. But it's not as if the newspaper is the congressman's only legal adversary.

As lawandorder.com also reported, in February, Dunes had a $9.9 million racketeering lawsuit over the Steele Dossier tossed by Federal Judge Liam O'Grady. But that one was so bad that the judge hinted at sanctions and against Nunes and his attorney should he persist."

His lawyer was actually sanctioned twice in his suits against @DevinCow. Undeterred, he got another lawyer to file another suit. It's been going on for two years now with no end in site. The Cow and this other fellow that helps him have GoFundMe sites set up to help pay for the constant legal fees.

At this stage of the game I would countersue for harassment and frivolous lawsuits. God knows there's plenty of documentation to win that one.
C

Nunes. Oh, how I wish something comes his way, soon before long.

Such, a stupid little moronic rat. I still don’t get how he got re-elected ? Do you suppose he was on the ES&S cheat list with Susan Collins and the rest

Wonder what the key is to that voting district is ?

Well, we know the Cows

didn’t vote him back in.