BUSTED? Why the numbers behind Mitch McConnell’s re-election don’t add up 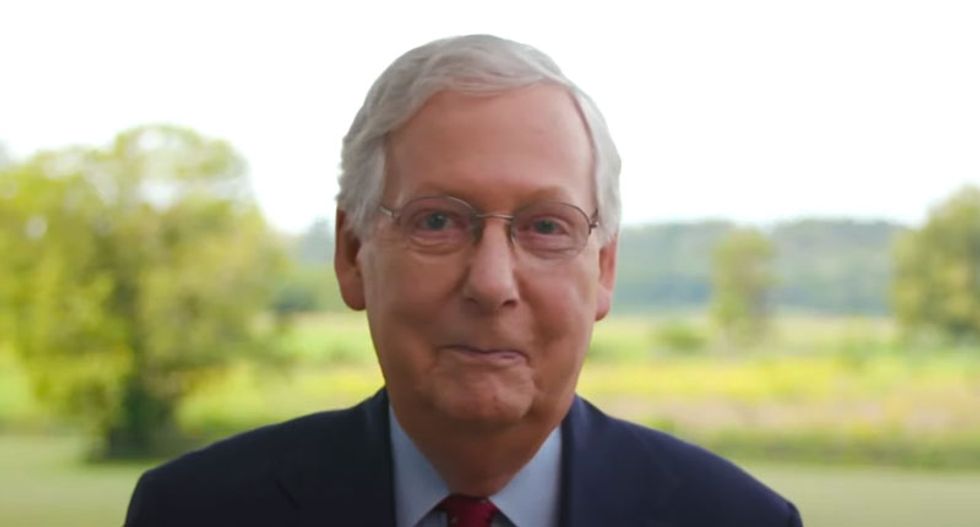 BUSTED? Why the numbers behind Mitch McConnell's re-election don't add up

On a Thursday in August in Louisville, months before the 2020 election, a parade of cars filled with Kentucky Teamster representatives and labor groups, showed their fury at Mitch McConnell's constant blocking of critical COVID aid. They drove by McConnell's office raucously honking and...

"Turning an 18% approval into a 58% win may seem like a “turning water into wine”-style miracle, but a “smoke & mirrors” parlor trick seems more likely. To better understand how the data could have been manipulated, look no further than Trump’s own legal filings..In a Dec. 4 filing in Georgia, Trump’s legal team referred to a “machine-controlled algorithm deliberately run” by a voting machine vendor, Dominion Voting Systems. They allege this algorithm “generally took more than 2.5% of the votes from Mr. Biden and flipped them to Mr. Trump.” So Trump’s own legal team, instead of providing evidence of fraud by Biden’s side, may have inadvertently revealed fraud benefiting Trump. In describing a deliberate, vendor installed, machine-controlled algorithm automatically taking a percentage of Biden’s votes and giving them to Trump, they certainly are outlining how fraud could have been executed.
Reactions: Grimhogun and Capitalism_is_Theft

People keep on and on with this complete nonsense.

If it's Lucifer himself on the GOP ticket vs. Raphael Warnock, you can bet that every republican that can is going to vote for Lucifer. It's like battered wife syndrome: they figure that as bad as their republican piece of shit is, the democrat is going to be far worse.
Reactions: Capitalism_is_Theft
C

This was good. This is more that backs up that they have been cheating for years!!

That Psychiatrist Dr. Frank, said they they have been cheating in the 2016 election he was certain of it. And, why would we not think they cheated in the 2020 down ticket elections?


So, the question needs to be asked, who owns ES&S ?

I don't know man. I sort of side with Zeedox on this one. How do such shitheads keep winning like that? I mean think about it. If people are pissed off enough to get rid of Trump surely the people in Kentucky have had enough of Moscow Mitch and that asshole Rand Paul. They're both just fucking awful.
Reactions: Capitalism_is_Theft

What kills me more is to a true neutral party watching from totally outside - "how much we (most of us here) believe the numbers must be fake" probably sounds a lot like the trumpers who can't believe they lost.
Reactions: Capitalism_is_Theft and Gomez Adams

Zeedox said:
What kills me more is to a true neutral party watching from totally outside - "how much we (most of us here) believe the numbers must be fake" probably sounds a lot like the trumpers who can't believe they lost.
Click to expand...

And that's it exactly.

You see, we're talking about really poor, uneducated parts of the United States. Most people in Ted Cruz', Mitch McConnell's area and the like never make it through high school, let alone anything else. Kentucky is in fact one of the poorest states in the nation. (It's number 44.)

They are fooled into believing that their problem is the democrats. They (the GOP) sell them on the racist that they are and convince them that they (democrats) are to blame for keeping them down since the civil war. It's all the Dem's fault.

They sell them on the idea that as bad as things are, if it weren't for them, they'd be even worse off. So those poor (literally), illiterate people keep on voting for GOP candidates because they're convinced if they don't things will get even worse than they already are.

As I said before, it's like battered wife syndrome: the woman still loves the man even though he beats her regularly. You guys (outsiders looking in) are like the cops that say, "Ma'am, you have GOT to leave this guy before he kills you! He's no good! We've seen this before!"

But she stays with him anyway. To the death.