Wargaming: The Nazi’s of the Modern Era

Well folks, as many examples of racism, antisemitism and hate we’ve posted on this site, something was brought to our attention yesterday that not only takes the fucking cake, it completely removes ANY AND ALL DOUBT that Wargaming not only don’t care one bit about enforcing it’s own rules, but they ACTIVELY PROTECT, PROMOTE, AND CONDONE RACISM.

There simply is no other logical explanation on earth. There just isn’t.

This article is the culmination of YEARS of violations that have gone unpunished, complaints that have been swept aside or outright ignored, but was really brought to the forefront by Allegra, who witnessed something he found, as any rational human being would, repulsive.

While on the forums a few days back, Allegra came across a player named BigRebOne. Let’s examine that name a moment before we go any further.

It’s obviously a take-off on the name Big Red One, which is in fact the 1st Infantry Division of the United States Marine Corps. This is their logo:

And this is their website: Fort Riley, Kansas – Home of the Big Red One

They are, without doubt, one of the most resilient, honorable collections of military men ever to walk the earth. But you notice the players name is “REB“, not “RED“. It’s obviously a takeoff on REBEL, which is a racist, southern United States group that still thinks slavery should be a thing.

Well, this is their logo:

And this is their website: Ku Kux Klan Racist Assholes

As hard as it is to stomach, you have to scroll down a ways to see their incorporation of the Rebel Flag. Get a barf bag. You’ll need it.

So what else is it about this BigRebOne guy that warrants his mention? I mean, surely, that wasn’t it. Surely being a redneck, racist asshole is bad, but not worthy of that much attention. Right?

Wrong. Here’s the avatar he uses on the World of Tanks Forum:

Really? I mean, FUCKING REALLY?!?! You let a guy named REB use an SS Officer as an Avatar and you do absolutely nothing about it?

OH! So it must not be against the rules, right? So Wargaming is OK with this. Ahhhhh…I get it now, I understand. We’ll just look at Wargaming’s own rules and make sure.

Well, shit, folks…wouldn’t you just know it? It’s actually AGAINST the rules in more ways than one. Let’s post ’em up, shall we? This is taken DIRECTLY FROM THE FORUM RULES LINK ABOVE:


The following list is only a summary, but it gives some idea of names, images, signatures, avatars and clan logos which are not accepted with the world of tanks environment:​
That’s four in a row, folks. You post a fucking Nazi SS officer as your avatar? And get away with it? How the flying fuck is that even possible? How in the name of all that is holy do you excuse that one?

OK…I digress yet again. Give me a moment here…

That’s got to be it, right?

(Seeing a pattern here yet?)

Allegra, who was almost as shocked by the avatar as we were, reported it to the forum moderators. I mean, come on…there’s no place for that bullshit in the game. What’s more, it’s BLATANTLY AGAINST THE FUCKING RULES. Frankly, I would have perma-banned any racist asshole stupid enough to ever even THINK about using that as an avatar, let alone actually doing it!

Nothing. Not one god damned thing. A day and a half went by and not a fucking thing was done about it.

Allegra was shocked. He though, “surely they saw that” but then began to think, “well, maybe they didn’t”.

So he checked the racist asshole’s profile to find out and guess what?

There it is, folks. Number one on the fucking list. Wargaming employee and forum moderator Volier_Zcit looked right at it. He came to the guys profile, looked right at a fucking Nazi SS officer image, and said, “I don’t see a problem with that at all.” and let it go.

Can you believe that mother-fucking shit?

So Allegra did the only other thing he could: report it to Wargaming Customer Service in a ticket.

So here’s his filing the report:

Pretty straight forward, is it not? So did customer service look into this at all? Did they think to themselves, “What the fuck? A guy’s going around on our forums with a fucking Nazi SS Officer as his avatar and NOBODY is doing a god damned thing about it?”

Nope. They sent him back whence he had come: 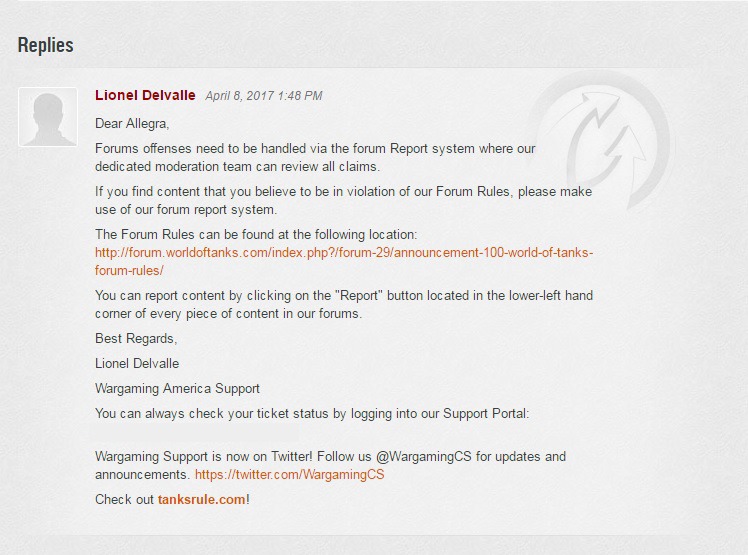 Well, what we’ve just recently discovered (from a source unrelated to this) is that Lionel Delvalle isn’t smoking anything at all. He in fact doesn’t exist at all. But that’s another story that’s coming up soon.

To add insult to injury, they INSTANTLY closed the ticket so he couldn’t even reply back to it at all…as if doing nothing at all was a solution to the problem.

So, to review:
Holy fucking shit. Is this a conspiracy?

Surely not. Surely, Allegra has just accidently stumbled upon two people that are so busy jacking off to the images of 10 year old cartoon girls that they copy and pasted bullshit responses, shut down the complaints, referred him to the rules (which he already knew but apparently they can’t be bothered with) and called it a day.

So what does he do?

Allegra, a man with the patience of Job and a man truly after God’s own heart, refuses to give up. He tries one last time.

And what does this do? Is the third time a charm?

Fuck no. You didn’t really think this had a happy ending, did you? He got the same bullshit all over again:

Now, other than the fact that Jether Currie doesn’t exist either, what do we know?

What we know is that for all intents and purposes, what we have here is not one, not two, but THREE Wargaming employees looking at BLATANT PROMOTION OF NAZISM, and letting it go. They didn’t do a fucking thing.

That, folks, can only mean one thing:

This goes back to other articles on this site, clans named with antisemetic slurs, player names making fun of Jews, racist rants allowed to go on and on and on unchecked…

And NOTHING happens to these racist pricks! NOTHING!

Just the other day, our buddy Gomez Adams got perma-banned for showing these racist rant images: 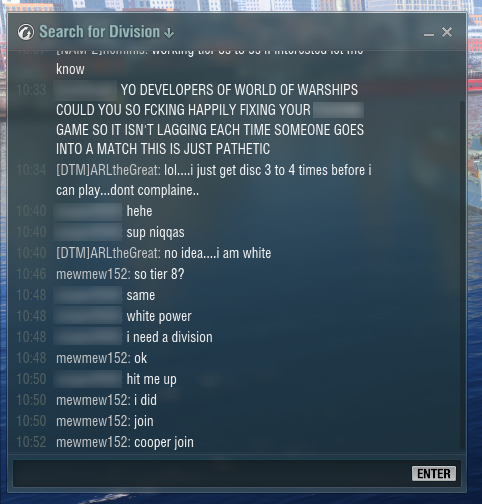 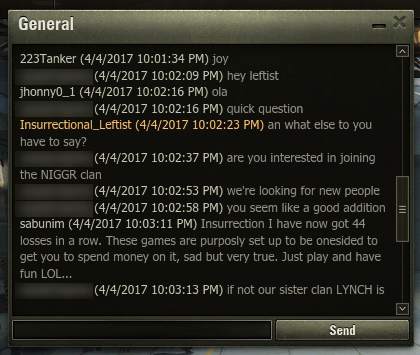 So if you post proof of racism, you’re INSTANTLY BANNED.

If you’re the fucking racist, WARGAMING PROTECTS YOU AND DEFENDS YOU.

This shit is against the law. How these fuckers aren’t in jail or at least having the shit sued out of them is completely beyond our ability to fathom.

One thing is certain: Allegra, by bringing this to us, has stuck his neck out. Huge. So if he should suddenly find himself the victim of unrelenting team kills, abuse, bans, and the like, we’re going to know EXACTLY why. After all, if you’re going to fuck with people telling the truth and standing up for what’s right, eventually, you’re going to find yourself in an absolute world of shit.

I can’t think of any collective group of racist assholes that deserve to be forever encased in shit than everybody working for Wargaming at this point. They’re the most revolting, racist, Nazi loving, pedophile shitheads on the planet, bar none.

I have been a blatant victim of their ignoring of this on several tickets in the past already. I have multiple tickets in archives, where at one time I had believe action was being taken, only to learn over that NO action was every being taken just as the rest of the player population was slowly learning and realizing. Their EULA is a revolving door. The exercise the power to enforce upon only certain individuals (which the choose to eliminate, or oppress, punish, censor, and relegate when they want to), and then totally disregard their EULA when it is totally convenient for them to do so.

To turn things around on one hand, what they will sometimes do even is take a false claim based upon NO evidence, of an accusation of a placed company troll, or shill to make a basis accusation that someone is a Nazi, then they will enforce the provision to the fullest extent, to ban them for 30-days, or permaban them if that uncover the real truth behind something the WGNA staff is doing (another words revealing or catching the Admins. or the Moderators in the act of doing things you are describing up above).

That is more evidence that “Corruption” exist in the WGNA office, and its is widespread. Which must mean that the main office heads in admin are taking marching orders from the very top, or being advised by their legal team on some technicality, perhaps?